Mitosis is a somatic or vegetative cell division and the daughter  cells resemble the mother cell in every aspect. Organs formed by this type of division such as liver, kidney, brain, skin, etc. are called vegetative organs because they do not participate directly in reproduction. 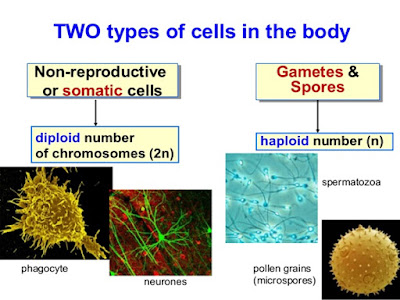 Growth of any organ system in plant or animal is due to increase in cell number by mitosis. Cells from young ad tender organs such as shoot, tips, bud, root tips, tissues of young animals the divided more rapidly than the cell from old and mature organs. This is the reason for a greater rate of growth in young organs . 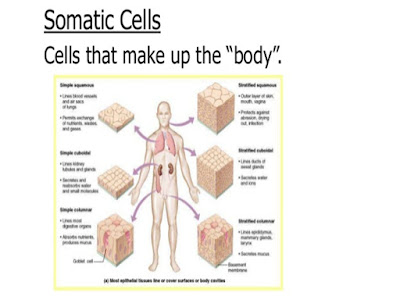 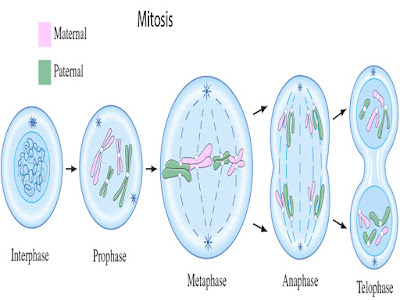 This is essential you have already learnt that chromosomes carry the genes. Genes carry the genetic information and are responsible  for the inheritance of parental features. They also regulate all the function of the cell by directing and controlling all the proteins in the cells. 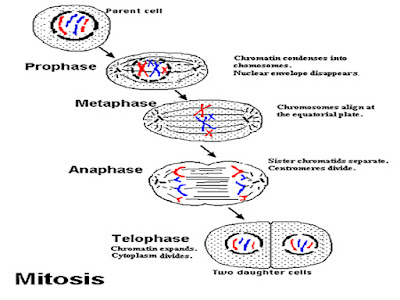 Before cell division begins, the non-diving or resting cells are said to be in interphase. This phase in the life of the cell is called interphase. 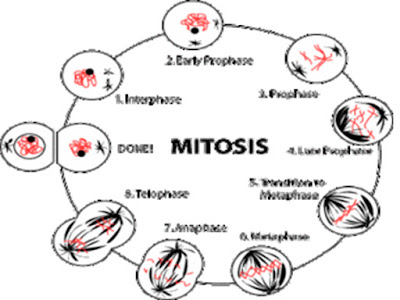 Chromosomes in the nucleus of interphase cell are in a highly decondensed state and form a diffuse network of filaments called chromatin.  Most of the cells spend a considerable portion of their life in interphase.Mitosis is of brief duration and once the division is complete, both the daughter cells usually enter into interphase. 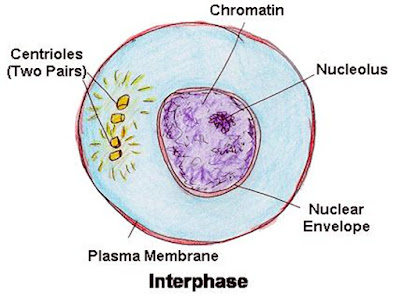 Once mitosis is initiated it proceeds without any interruption till the cell division is complete and daughter cells are formed.Based on the changes occurring in the five stages have been recognized in mitosis .1. prophase     2. Metaphase     3. Anaphase   4. Telophase  and 5. Cytokinesis. 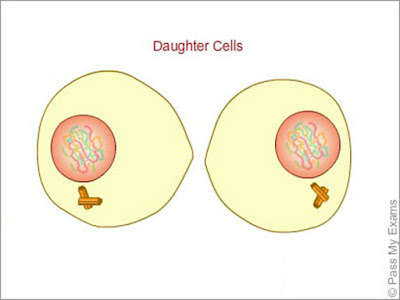 Prophase :
This is the first stage of cell division. Before prophase starts the chromosomes are in a decondensed state and appear as a diffuse network of filaments. During prophase, the chromosomes start condensing. 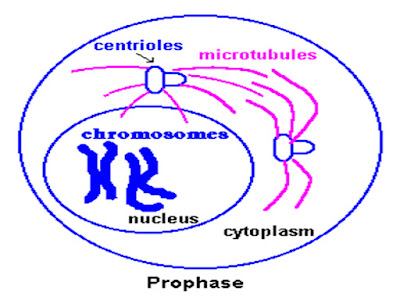 As a results, the shape of the chromosomes becomes definite and distinct. Each chromosomes has two arms called chromatids. The two chromatids are joined together by centromere. While these changes are occurring the nucleous and rest of the structure in the  nucleus disappear gradually.

Meanwhile the centrioles move to the  opposite side of nucleus. In plants cells, where centrioles are usually absent the they appear at this stage of cell division. From each centriole fine thread like fibres appear. These fibres are called spindle fibres. Acentriole with spindle fibres is called an aster. The spindle fibres grow towards the centre of the cell.

2. Metaphase:
Chromosomes now move to the centre of the cell and arrange themselves in a row. This looks like a plate and is called quitorial plate. Some of the spindle fibres are attached to the  centromere of each chromosome. Rest of the fibres grow towards opposite pole and join the centriole on the opposite side. Each chromosome is attached to fibres from the two opposite poles. 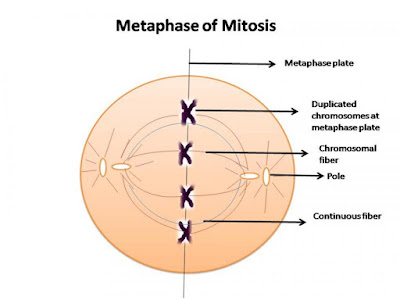 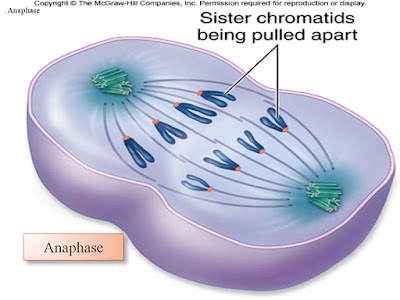 4. Telophase:
By the beginning of this phase, the chromosomes complete movement and will be at each end of the cell. Nuclear membrane, nucleolus and other nuclear structure reappear. Chromosomes begin decondensation process. By the end of telophase, cell will be having two nuclei, one on each side. Spindle fibres now disappear. 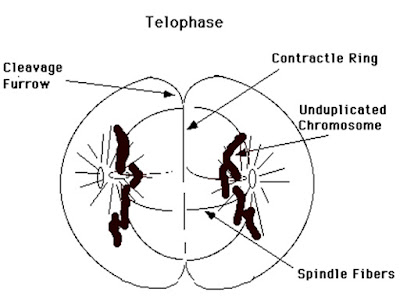 5. Cytotinesis:
A new membrane is formed at the quitorial plate during this phase. This didivide the cell in two daughter cells. Thus at the end of mitosis, two daughter cells which are extractly similar to the mother cell are formed. This first four stages of cell division involve changes in nucleus and division of nuclear components equally between daughter cells. 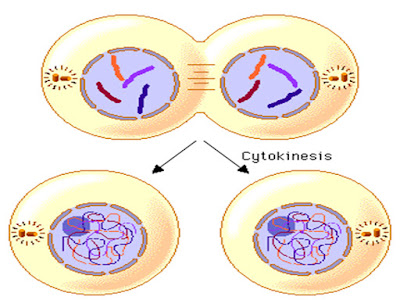 Hence, these  four phases prophase, metaphase, anaphase and telophase of cell division are together called karyokinesis. Means division of  nucleus. The last stage is called cytokinesis as the cytoplasm is the only component undergoing division in this stage of mitosis. 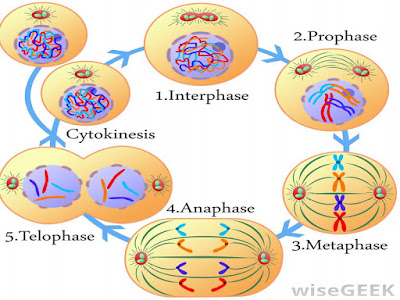 POINTS TO REMEMBER:
Mitosis is a somatic cell.
Doubling of the number of chromosomes is the major event before cell division.
Interphase is the period when the cell grows in size nd performs the physiological functions. Chromation is in a decondensed state in the nucleus of an interphase cell.
During prophase, centrioles move to the opposite poles of the cells and spindle fibres formed from the centrioles.
During metaphase, chromosomes  move to centre of the cell and form equatorial plate. Spindle  fibres grow in length and attach themselves to the centromere  of each chromosome..
During anaphase, the chromosomes are pulled apart and each half moves to the opposite side of the cell.
During telophase, the nuclear membrane appears around the chromosomes and chromosomes decondense into chromatin.
During cytokinesi, a membrane or a cell wall appears in the middle of the cells and divides the cytoplasm of the cell into two. With this the cell division is completed and two daughter cells are formed. During mitosis, kayokinesis occurs before cytokinesis.

Posted by AKUNURI NANDITHA at 9:41:00 PM
Email ThisBlogThis!Share to TwitterShare to FacebookShare to Pinterest