A few days later Phudgudi laid an egg. Bhanate said – Give me your egg. I will eat it. Do give it. Give it! Give it. Phudgudi was scared. She said – Yes, but I want you to first go and wash your beak in the river.

Bhanate went to the river bank and said to it – O river ! Yes, brother – said the river. Bhanate – O river, please give me some water. With cold water I’ll wah my beak which I seek. 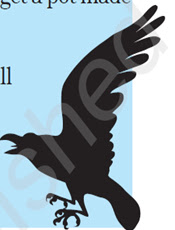 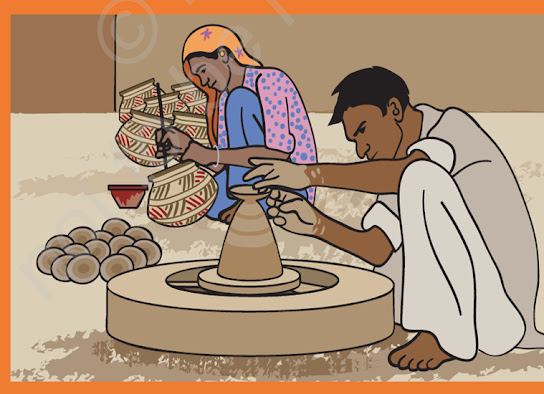 The blacksmith said – Sure, you can take the trowel but do remember to return it. Bhanate took the trowel and went to the clay-pit. It dug the soil and got some clay. The potter made a pot for him. 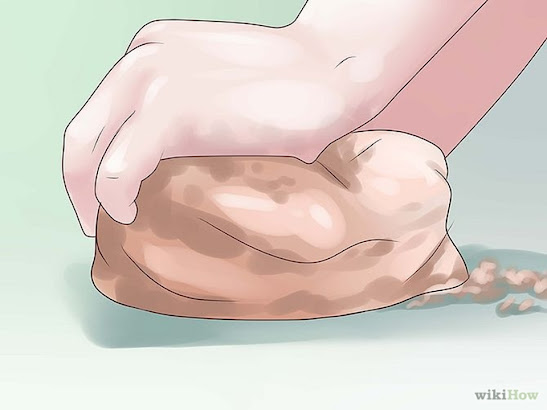 let us how a potter make apot.
Many, many years ago, there was a time when people had no pots. They started feeling the need to store and cook food. After a lot of effort and thinking, people learnt to make pots. 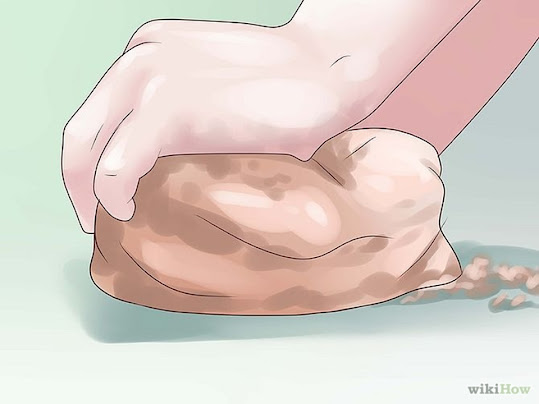 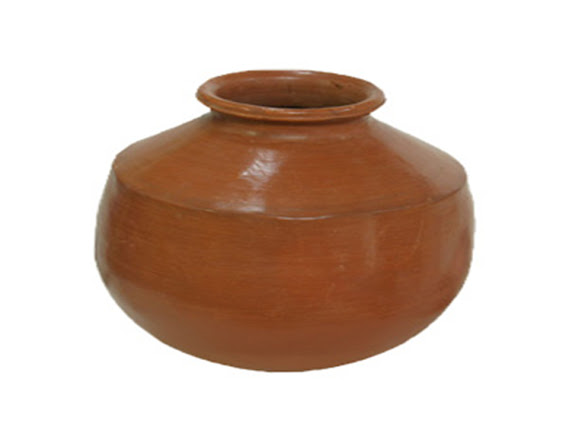 In history first  potter's wheel was first developed in Mesopotamia.  A  potter's wheel is a machine used in the shaping of round ceramic ware. The wheel may also be used during the process of trimming the excess body from dried ware and for applying incised decoration or rings of color. 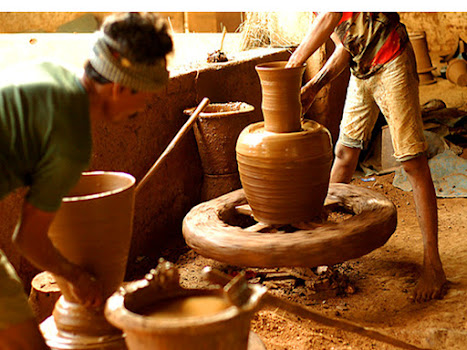 Preparations of pots
There are many techniques in use for throwing, ceramic, containers, although this is a typical procedure: First Knead the clay. Start with about 1/2 pound of clay with 30% of moisture. Slowly warm it and work out the air bubbles by kneading it with your hands. 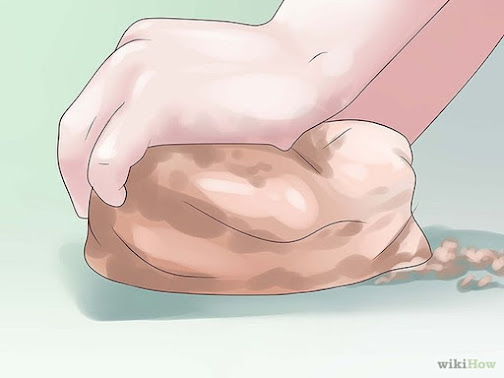 This will even out the clay’s consistency, eliminating lumps of soft spots, and make it more pliable and easier to work with. Take care to avoid folding, poking, or other actions that could add air pockets and bubbles to the clay. 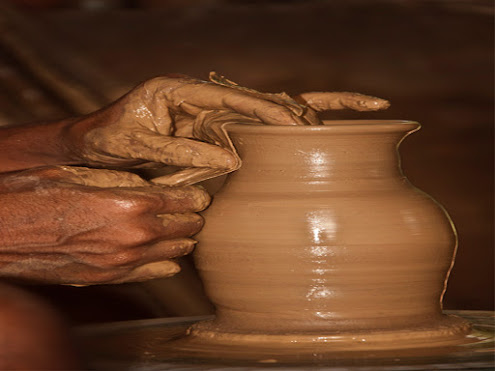 A round, moist lumpy clump of clay body is thrown at a wheel head or a bat attached to it. The lump or clump is made even and forced to the centre of the wheel by applying pressure with the hands. 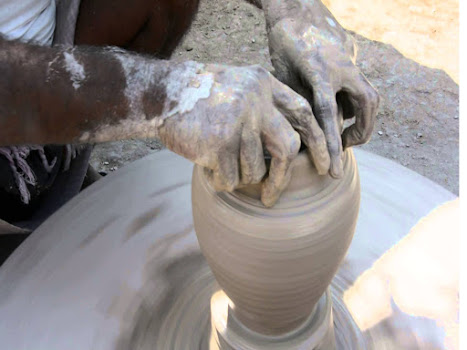 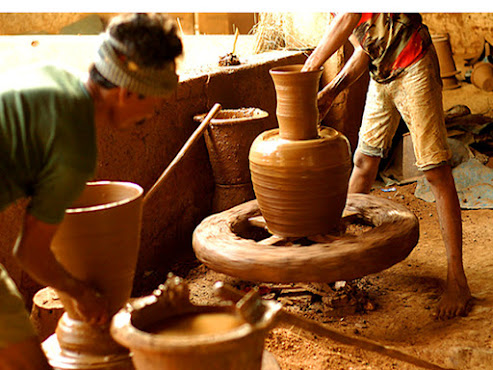 The hole thus made is widened. The sides thus defined are pulled up and made thinner by pressure between the hands. The vessel is shaped, and the mouth is smoothed. 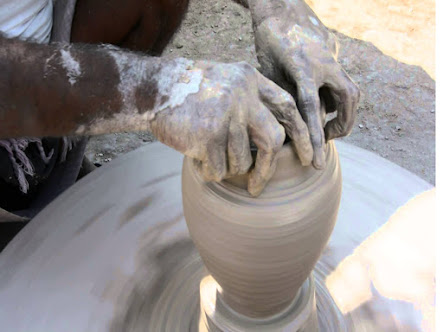 The vessel is cut from the wheel head with a cheese wire and left to stiffen. Sometimes the stiffened vessel is inverted on the wheel and trimmed with a sharp tool. 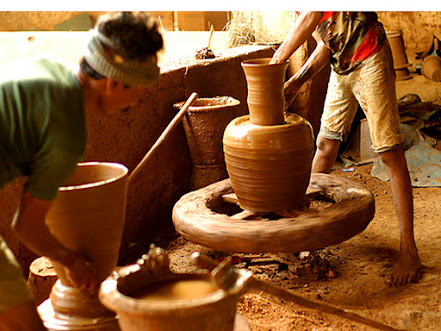 Now I let the pot dry in front of the warm fire place so that the next layers will not be too heavy a burden to carry for the bottom. At this stage, I could stop and let the pot dry completely and fire it. 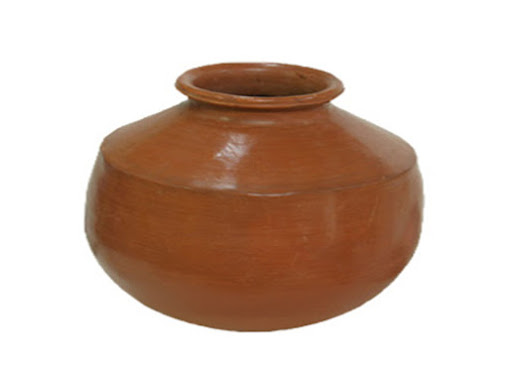 It will make a nice wee bowl. This is then the first method of making a pot completed. A skilled potter can quickly throw a vessel from 15 kg of clay.
Alternatively, by throwing and adding coils of clay then throwing again, pots up to four feet high may be made, the heat of a blowlamp being used to firm each thrown section before adding the next coil. 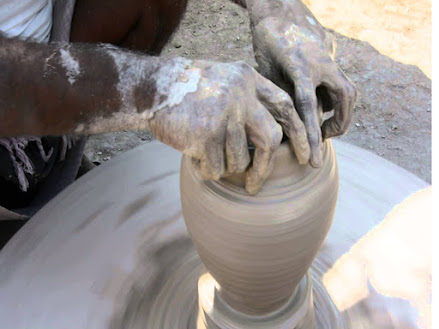 In Chinese manufacture, very large pots are made by two throwers working simultaneously. Bhanate filled water in the pot and washed its beak. He then ran to eat Phudgudi’s egg.

By that time, the sparrow’s egg hatched. A little bird came out of it and flew away. Far away from Bhanate.

Posted by AKUNURI NANDITHA at 11:35:00 PM
Email ThisBlogThis!Share to TwitterShare to FacebookShare to Pinterest