Raksha Bandhan
Sending you a thread of love which will bind our heart and life and makes our bond of togetherness stronger. Happy Raksha Bandhan! Wishing you a very Happy Raksha Bandhan!!
The festival of Raksha Bandhan will be celebrated on August 26 and it is considered as one of the most important festivals in Hinduism. The name, Raksha Bandhan, translates to ‘Protection Bond’, which signifies the promise to protect. On this auspicious day, sisters tie ‘Rakhi’ around the wrist of their brothers. The Rakhi thread is considered as sacred because it reminds of the promise a brother makes to her sister that he will protect her until death. On the occasion, sisters pray for the good health and well being of their brothers and in lieu get gifts from their brother.

Celebrated on the full-moon day of the Hindu month of Sravana (July/August), this festival celebrates the love of a brother for his sister. On this day, sisters tie rakhi on the wrists of their brothers to protect them against evil influences, and pray for their long life and happiness. They in turn, give a gift which is a promise that they will protect their sisters from any harm. Within these Rakhis reside sacred feelings and well wishes. This festival is mostly celebrated in North India.

Meaning of Raksha Bandhan
The festival is made up of two words, namely "Raksha" and "Bandhan." As per the Sanskrit terminology, the occasion means "the tie or knot of protection" where "Raksha" stands for the protection and "Bandhan" signifies the verb to tie. Together, the festival symbolizes the eternal love of brother-sister relationship which does not mean just the blood relationships only. It is also celebrated among cousins, sister and sister-in-law (Bhabhi), fraternal aunt (Bua) and nephew (Bhatija) and other such relations.

History: The history of Rakshabandhan dates back to Hindu mythology. As per Hindu mythology, in Mahabharata, the great Indian epic, Draupadi, wife of the Pandavas had torn the corner of her sari to prevent Lord Krishna's wrist from bleeding (he had inadvertently hurt himself). Thus, a bond, that of brother and sister developed between them, and he promised to protect her. 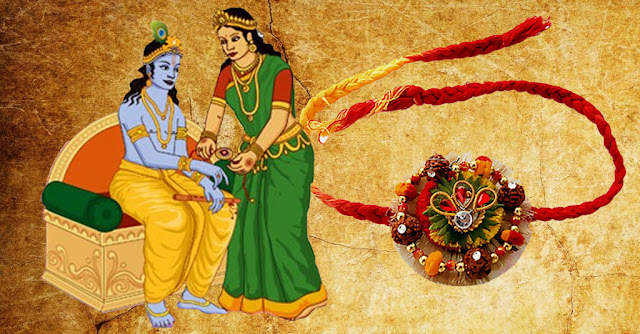 It is also a great sacred verse of unity, acting as a symbol of life's advancement and a leading messenger of togetherness. Raksha means protection, and in some places in medieval India, where women felt unsafe, they tie Rakhi on the wrist of men, regarding them as brothers. In this way, Rakhi strengthens the bond of love between brothers and sisters, and revives the emotional bonding. Brahmins change their sacred thread (janoi) on this day, and dedicate themselves once again to the study of the scriptures.

Importance of Raksha Bandhan among various religions in India
Hinduism- The festival is mainly celebrated by the Hindus in the northern and western parts of India along with countries like Nepal, Pakistan and Mauritius.
Jainism- The occasion is also revered by the Jain community where Jain priests give ceremonial threads to the devotees.
Sikhism- This festival devoted to the brother-sister love is observed by the Sikhs as "Rakhardi" or Rakhari.

Importance of Raksha Bandhan
As we all know, siblings carry a special place in our hearts. However, the particular bond of a brother and sister is very unique. The care they have for each other knows no bounds. The love they share is beyond compare.

No matter how much they fight with one another, they always stand behind them in support. Brothers and sisters fight with each other over trivial matters. In other words, they share a bond which is full of teasing and love.

Brothers and sisters help us grow. At every stage of our lives, the bond between them grows stronger. They stand with each other through thick and thin. The elder brothers are very protective of their sisters. Similarly, elder sisters care a lot for their younger brothers. The younger ones look up to their elder siblings.

Raksha Bandhan is all about celebrating this bond. It is a symbolism of the unique and special relationship shared by the two. This day has been rightly recognized to have a good time and focus on this beautiful bond. It serves as a symbol of their love, togetherness, and confidence in each other.

Occasion of Raksha Bandhan
Raksha Bandhan is a time for pampering for the sisters. On this auspicious occasion, the sisters tie a sacred thread i.e. rakhi, on their brother’s wrist. It is done so with the intent to wish good health and long life. On the other hand, the brothers, in turn, bless their sisters and pledge to protect them and care for them all their lives. The sisters receive a lot of love and pampering on this day. It is in the form of chocolates, gifts, money, dresses and more.

The family members dress up for this occasion, usually in ethnic wear. We see the markets flooded with colorful rakhis and gifts. Every year, fashionable and trendiest rakhis do the rounds of the market. Women shop for the perfect rakhis for their brothers and the men go out to buy gifts for their sisters.

In conclusion, Raksha Bandhan is one of the most enjoyable festivals. It gives the brother and sister to strengthen their bond. Nowadays, even sisters who do not have brothers celebrate Raksha Bandhan with their sisters. The essence of the festival remains the same nonetheless.

Posted by AKUNURI NANDITHA at 1:28:00 PM
Email ThisBlogThis!Share to TwitterShare to FacebookShare to Pinterest