Independence Day: History, importance and significance of the day -Speech and essay writing

Independence Day of India, which is celebrated religiously throughout the Country on the 15th of August every year, holds tremendous ground in the list of national days, since it reminds every Indian about the dawn of a new beginning, the beginning of an era of deliverance from the clutches of British colonialism of more than 200 years. It was on 15th August 1947 that India was declared independent from British colonialism, and the reins of control were handed over to the leaders of the Country.

On August 15, 1947 India had achieved independence after years of struggle. On this day, it ceased to be a colonial nation and secured full autonomy from the British that ruled over it for years. The day holds great significance in the heart of every Indian citizen living in India and abroad. We as Indians pay respect to all the leaders who fought bravely for our nation's freedom in the past.

On this day, the Prime Minister of India will hoist our tricolour flag at the Red Fort, Old Delhi. He will also deliver a speech to the nation as well. Independence day i.e. the 15th of August is declared as a national holiday which means every government office, post offices, banks and stores will remain shut.

While it is a celebratory annual occasion and a national holiday, wherein people hoist the national flag, wear colours signifying the tricolour, take part in many games and cultural programmes, it also coincides with the Partition of the country that brings back painful memories, given that India was severed on communal grounds, much to the dismay of many national leaders and ordinary citizens.

On 15 August 1947, when the first Prime Minister of independent India Pandit Jawaharlal Nehru, hoisted the national flag at the Lahori Gate of Red Fort in New Delhi, the Father of the Nation Mohandas Karamchand Gandhi fasted in Calcutta (now Kolkata). He is believed to have spent his time praying, fasting, spinning, and silently protesting the sectarian hatred that had taken over the country.

HISTORY OF INDIAN INDEPENDENCE DAY
History: India was ruled by the Britishers for many years. The East India Company ruled India for about 100 years. It was in 1757 when the East India Company won the battle of Plassey. It was after the win went the Company started exerting power over the India. Our nation had its rebellion against the foreign rule for the first time in 1957. The entire country united against British power. It was an unfortunate event as India was defeated back then but after that time. Indian rule was then passed to the British who ruled our country till India got its independence. Our nation faced a long campaign to gain independence.

Britain had weakened after the two world wars and began thinking of ending its rule in India. In 1947, the British government declared the transfer of all powers to India by June 1948, but continuing tensions and violence between Muslims and Hindus led to a consensus for the partition of India into two separate states. To deal with this, the British government proposed on June 3, 1947, that any constitution framed by the Constituent Assembly of India will not be applicable to parts of the country that refuse to accept it.

On the same day, a plan for partition was put into action by Lord Mountbatten- the then viceroy of India. Mountbatten’s plan was agreed to by both the Congress and the Muslim League. As new borders were drawn and the world map changed forever, between 300,000 and 500,000 people died on both sides.

On August 15, 1947, at midnight, India gained independence and was concluded by the iconic speech by Jawaharlal Nehru, “Tryst with destiny.” India's freedom struggle has always been an inspiration to the work as it was the most non-violent campaign in the world.

The great British rule over India came to an end with the powers transferred to the newly independent entities Pakistan and India. Lord Mountbatten became the first governor-general of the new Dominion of India and Jawaharlal Nehru became the first prime minister of Independent India. The Constituent Assembly that was set up in 1946 became the Parliament of Indian Dominion.

Significance: This day reminds us of all the sacrifices that were made by our freedom fighters in order to set India free from British rule. 15th August is a national holiday and the day is then celebrated with flag hoisting, parades and cultural events.

INDAIN NATIONL FLAG
The national flag is the depiction of a country’s social, economic and political values. A national flag of a country is a national honour. It carries the values on which the mere foundation of that nation depends. Indian National Flag is of utmost importance for the people of India and holds much spiritual value for them.

It is the roof under which the feeling of nationalism and patriotism flourishes. It represents the hopes and aspiration for the citizen of its country and a symbol of national pride. It is not just a piece of cloth, but a feeling of pride which helps the soldiers to sacrifice their lives just keep it flying high in the sky. "A flag is a necessity for all nations. Millions have died for it. It is no doubt a kind of idolatry which would be a sin to destroy. For, a flag represents an Ideal The unfurling of the Union Jack evokes in the English breast sentiments whose strength it is difficult to measure. The Stars and Stripes mean a world to the Americans. The Star and the Crescent will call forth the best bravery in Islam." "It will be necessary for us Indians Muslims, Christians Jews, Parsis, and all others to whom India is their home-to recognize a common flag to live and to die for." - Mahatma Gandhi

Who designed the flag of India? The design of the flag of India that was first presented in 1921 to Mahatma Gandhi, leader of the All-India Congress, was created by Pingali (or Pinglay) Venkayya. It consisted of the colours associated with the two principal religions, red for Hindus and green for Muslims. In India, the term "tricolour" refers to the Indian national flag. The National flag of India is a horizontal tricolor of Saffron colour shows courage, sacrifice, and renunciation. White colour shows truth and purity in thoughts and dark green is the symbol of life prosperity. 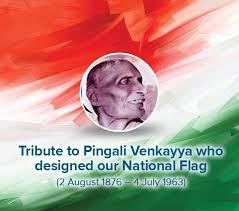 The Ashok Chakra can be seen on the Indian National flag, where it is rendered in a navy blue colour on a white background. The Ashoka Chakra has 24 spokes which inspire every Indian to work tirelessly for 24 hours.

The Ashoka Chakra is the depiction of the “Dharmachakra”; represented with 24 spokes. Ashok Chakra is also called the wheel of duty. Writing in his journal, Young India, Mahatma Gandhi first spoke about the need for an Indian flag in 1921. He proposed a flag with the charkha or spinning wheel at the centre. The idea of the spinning wheel was put forth by Lala Hansraj, and Gandhi commissioned Pingali Venkayya to design a flag on a red and green banner. The flag underwent some changes and became the official flag of the Congress at the 1931 meeting.

There are 24 spokes in the Ashoka Chakra which represents 24 qualities of a person. In other words, these spokes can be termed as the 24 religious paths made for humans. All the paths mentioned in the Ashok Chakra will lead any country on the path of progress. This is probably the reason that designers of our National Flag removed the Charkha from it and put the Ashok Chakra in the middle of the flag. The wheel is called the Ashoka Chakra because it appears on a number of edicts of Ashoka, the most prominent among which is the Lion Capital of Ashoka. 6. Each spoke on the chakra symbolises one principle of life and also the twenty-four hours in the day, which is why it is also called the 'Wheel of Time'.

Celebrations on Indian Independence Day: The national anthem is sung on this day, flag-rising ceremonies and drills are also conducted in every corner of the country. Indians make an effort to dress in a specific way to celebrate their nation and culture. Kite flying is another tradition that is followed on Independence Day with people of all age groups as participants.

It represents the freedom that we achieved on this day. The Prime Minister of our country hoists our flag at the Red Fort in Old Delhi. A parade with members of the army and police also takes place. A speech to the nation is delivered by the PM where he speaks on the country's accomplishments in all these years. The prime minister then delivers a televised address to the country, recounting the major accomplishments of India during the previous year and outlining future challenges and goals.

In 2007, APJ Abdul Kalam Inspiring Speech on India at European ParliamentAbdul Kalam India's Missile man and former president gave this inspiring speech on india. The speech would be one of the most memorable ones by Kalam. “i am reminded of the dream of the indian poet kaniyan poongundranar who articulated 3,000 years back in tamil classic Purananuru , he says “yaadhum oore yaavarum kelir” which means, which means, ‘I am a world citizen. Every citizen is my own kith and kin’. He said that 3000 years ago. Where there is righteousness in the heart. There is beauty in the character. When there is beauty in the character, There is harmony in the home. When there is harmony in the home, There is order in the nation. When there is order in the nation, There is peace in the world.’

All I desire for my country is happiness. Let me be the first person to wish you a special Happy Independence Day! Let's salute our great nation on its Independence Day! I hope you all feel grateful for the freedom you have and are proud of the nation you were born to. JAI HIND!

Posted by AKUNURI NANDITHA at 6:32:00 PM
Email ThisBlogThis!Share to TwitterShare to FacebookShare to Pinterest