GETTING TO KNOW PLANTS
CBSE CLASS-VI
BIOLOGY
Go outside and observe all the plants around you Do you see that some plants are small, some very big, while some are just patches of green on the soil? Some have green leaves, while some others have reddish ones. Some have huge red flowers, some have tiny blue ones, while some have none. We do see a variety of plants existing all around us near our homes, in the school ground, on the way to the school, in the parks and gardens, isn’t it? Let us get to know the different parts of any plant. This will help us understand the differences between plants of different kinds. Can you label the stem, branch, root, leaf, flower and fruit of the plant. Colour the parts of the plant.

Based on these characters most plants can be classified into three categories: herbs, shrubs and trees. Plants with green and tender stems are called herbs. They are usually short and may not have many branches. Herbs are small plants which have soft stem. Examples: Wheat, paddy, cabbage, grass, coriander, etc.

Shrubs: Some plants develop branches near the base of stem. The stem is hard but not very thick. Such plants are called shrubs. These are bushy and medium- sized plants and they are somewhat bigger than herbs. Their branches start from just above the ground. Examples: Lemon, Coriander, Henna, Rose, etc.

Tree: Some plants are very tall and have hard and thick stem. The stems have branches in the upper part, much above the ground. Such plants are called trees. These are tall and large plants with hard and woody stem. A single main-stem arises from the ground. The main-stem is called trunk. The trunk gives out many branches at certain height. The branches carry leaves, flowers and fruits. Examples: Mango, banyan, acacia, coconut, poplar, willow, etc.

Parts of Plant and their function:Plants are important part of nature. They can live on land and in water. Plants are very useful to us and we get many things from plant such as food, wood, paper etc. Most of our food that we eat comes from plants for example -fruits, vegetables, cereals, pulses etc. We eat roots, leaves, stems, flowers and fruits of plants.

Each part of the plant has its own work to do. All these parts work together to keep the plant alive. There are two main parts of plant. One is shoot and the other is root.  The part of the plant that grows under the soil is called as root. Different plants have different types of roots. 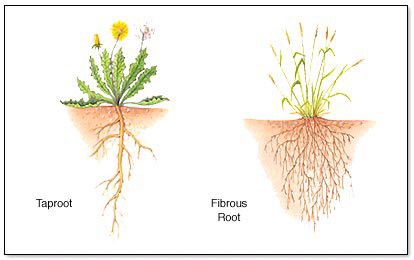 The Shoot: The part of plant that grows above the soil is called the shoot. Stem, branches, leaves, flowers and fruits are all the parts of shoot.

The function of each plant parts is described below.
Root: The underground part of a plant is called root. It is usually pale in colour.  The root is a very important component of the plant system, as, without the presence of roots the plant ceases to exist.

Functions of Roots: Roots are responsible for absorbing minerals and water from the soil and transferring them to the stem. And the stem becomes capable of transporting these to all parts of the plant. Another important function of roots helps in holding the plant firmly to the soil. They anchor the plant to the soil. This is essential to support the upright position of the plants. Roots also perform the function of storing important nutrients and food for growth.

There are two major types of roots: Roots are two types: tap root and fibrous roots.
Tap root: This is composed of a main root which grows from the base of the stem. Many branches and sub-branches come out of the main root (tap root). Examples: pea, radish, carrot, mango, marigold, mustard etc.

Fibrous root: In this type, a cluster of thin fibre-like roots arise from the base of the stem. These roots spread out in the soil. Examples: Maize, grass, wheat, millet, etc.

Aerial roots: These are roots of plants and trees that grow above the ground instead of under the ground. 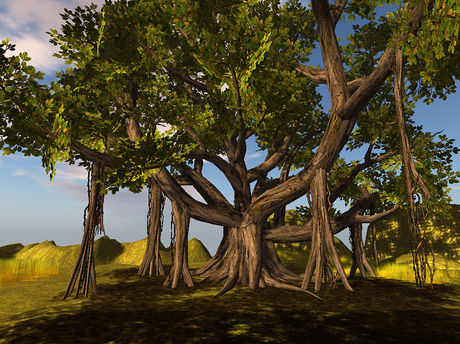 We have learnt that roots absorb water and minerals from the soil and the stem conducts these to leaves and other parts of the plant. The leaves prepare food. This food travels through the stem and is stored in different parts of plant. We eat some of these as roots— like carrot, radish, sweet potato, turnip and tapioca. We also eat many other parts of a plant where food is stored.

Stem: Stem usually grows above the ground. The stem makes the main structural framework of the plant. The stem bears leaves, branches, buds, flowers and fruits.

The point from where branches or leaves grow is called as node. The portion of a stem between two consecutive nodes is called the internodes.
Functions of stem:
The stem gives structural support to the plant. It bears branches, leaves, flowers and fruits. The stem carries water and minerals from the roots to different parts of the plant. Stem gets modified for food storage in some plants, e.g. potato, ginger, turmeric, etc. 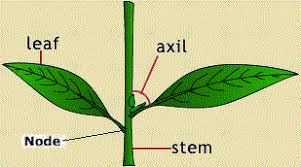 Leaf:
Observe the leaves of some plants around you. Are all the leaves of same size, shape and colour? How are leaves attached to the stem? The part of leaf by which it is attached to the stem is called petiole. The broad, green part of the leaf is called lamina. Can you identify these parts of the leaves in plants around you? Do all the leaves have petioles? names of some plants having reticulate and parallel venation.The leaves of plants are majorly responsible for performing two essential functions for the plant’s survival and growth. These two functions are called transpiration and photosynthesis. Leaves and stem together form the shoot.

Parts of a leaf:
The leaf is a thin, flat and green structure which arises from the node of the stem. The green colour of leaves is due to the presence of chlorophyll. Chlorophyll is a green-coloured pigment. The flat green portion of the leaf is called leaf-blade or lamina. The leaf is attached to the stem by a short stalk; called petiole. Small lines present on a leaf are called its vein. These gives support and transport water and mineral through the leaf. A thick vein in the middle of the leaf is called midrib. 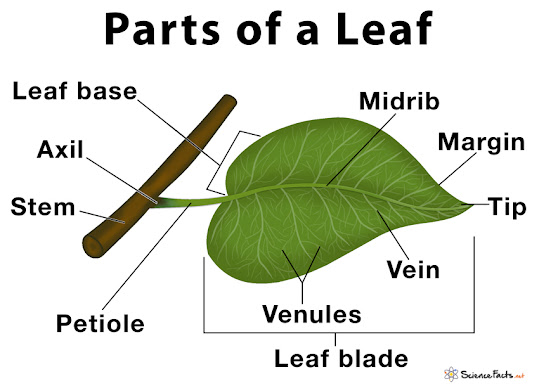 Let us discuss about:
Venation: Arrangement of veins in a leaf is called venation. We distinguish between two major types of leaf venation.

Parallel venation: When the veins run parallel to each other, it is called parallel venation.This type of venation is in monocots like banana, wheat, coconut, leaves of paddy, wheat, grass, etc. 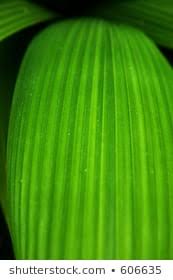 Functions of leaf:
Photosynthesis: Green leaves prepare food for plants by using water and carbon dioxide in the presence of sunlight. This process is called as photosynthesis. . Leaves prepare their food in the presence of sunlight and a green coloured substance present in them. For this, they also use water and carbon dioxide. Oxygen is given out in this process. The food prepared by leaves ultimately gets stored in different parts of plant.

Stomata: There are many small openings on the lower surface of a leaf. These are called stomata. Stomata allow gases to enter or exit the leaf. Unwanted water is also removed through stomata; in the form of water vapour.

Reproduction: Leaves of some plants helps in reproduction also. For e.g. leaves of Bryophyllum give rise to a new Bryophyllum plant. 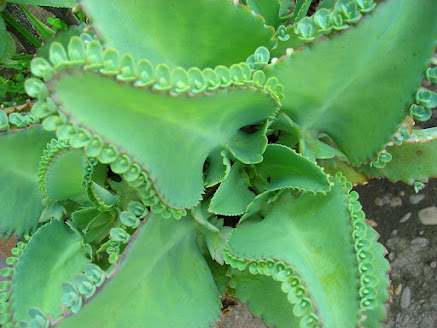 Children in next session we will learn about parts and function of the flower.
FLOWER
Which colour did you use for the flower ? Are all flowers colourful? Have you ever seen flowers on grass, wheat, maize, mango or guava? Are those brightly coloured? Let us study a few flowers.

Flower: Flower is the most beautiful and colourful part of a flowering plant. It is the reproductive part of a plant. Following are the main parts of a flower:

Sepal: The outer green leafy structure in a flower is called sepal. Petals make the first whorl of a flower. This whorl is called calyx. It protects the flower at bud stage. Different flowers have petals of different colours. Petals: The coloured leaf-like structures; next to the sepals; are called petals. The bright colours of the petals, attracts insects. This helps the plants in reproduction. The whorl formed by the petals is called corolla.

Stamens: Around the centre of the flower there are many little stalks with swollen tops. These are called Stamen. It is the male part of the flower. Each stamen consists of a green stalk called filament. The capsule-like structure; called anther is at the top of the stamen. The anther produces pollen grains. Pollen grains are powder like particles and take part in reproduction. 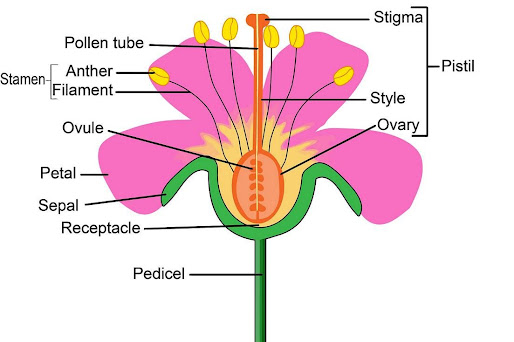 Fruits are the fleshy substances that usually surround seeds. Some of the fruits that we eat are orange, mango, apple, grapes, etc. They protect the seeds and attract animals to eat them. This helps in seed dispersal. `

Seeds contain plant material that can develop into another plant. This plant material is called an embryo. Seeds are covered with a protective seed coat and have one or two cotyledons. Cotyledons are the food for the baby plant until it can make its own food from light and are often the first embryonic leaves of the plant.

THANK YOU
NANDITHA AKUNURI
Posted by AKUNURI NANDITHA at 6:57:00 PM
Email ThisBlogThis!Share to TwitterShare to FacebookShare to Pinterest