In human beings, a pair of kidneys, a pair of urethras and a urinary bladder represent the excretory system. The nitrogenous end product in man is urea. 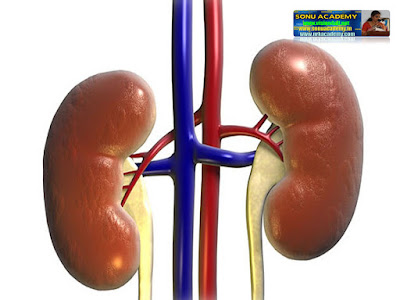 Kidney is a bean shaped, red coloured organ. Kidneys are attached to the dorsal body wall, on either side of vertebral column in the abdominal cavity. Its outer margin is convex and inner margin in concave. 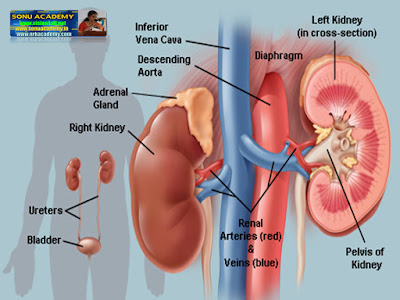 The notch present on the inner margin is called hilus. Renal artery, which brings blood to the kidney from heart, enters the kidney through hilus. 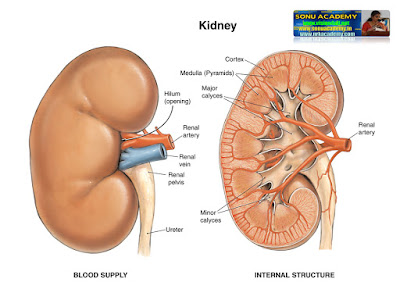 Renal vein, which carries blood from the kidney to the heart, and ureter come out of the kidney through hilus. Each ureter is a thin walled tube. The anterior end of ureter  is wide and called pelvis. 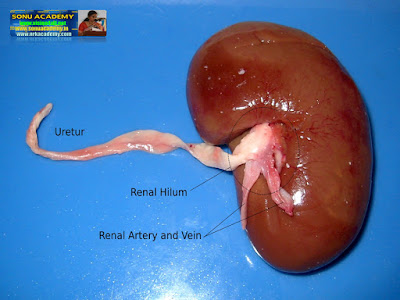 The ureters open into the urinary bladder. Urine is stored in the bladder till it is filled and then is sent out through a canal called urethra. On the top of each kidney, an adrenal gland is present. It is an endocrine gland and has nothing to do with excretion. 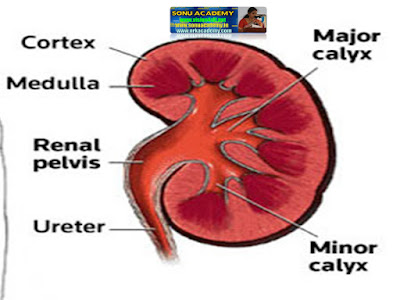 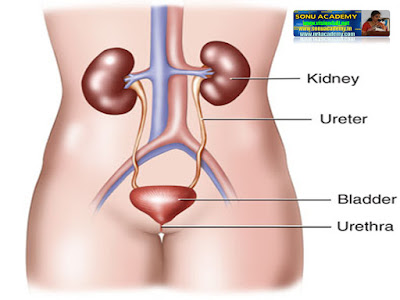 In the medulla are 9-12 inverted pyramid like structures with their broad base towards the cortex and narrow end towards the pelvis. These extend into pelvis. 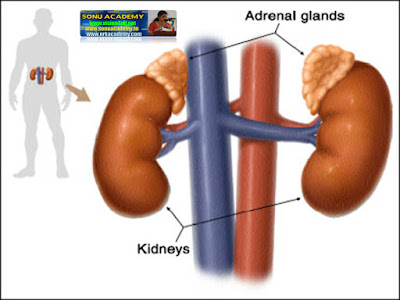 The broad end of each pyramid is branched and gives the appears of sepals of a flower. Hence, these are called calyces. Through calyces, urine reaches funnel like ducts and from there into pelvis. From pelvis urine enters ureters. 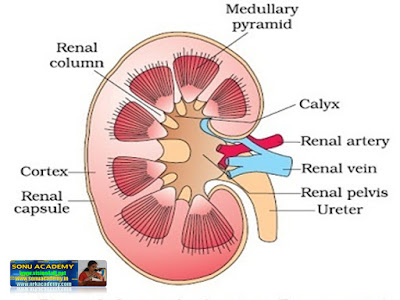 The structural units of kidney are long tubules called nephrons. These are responsible for urine formation. In human kidney, there are about 2 lakhs of nephrons. 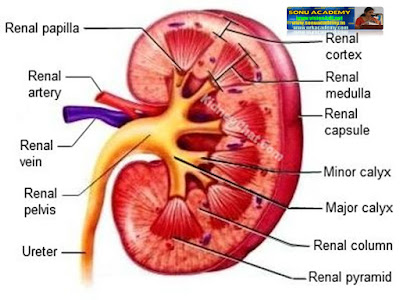 Each nephron has two portions – a cup like structure called bowman’s capsule and a tubular portion. Bowman’s capsule is a two layered cup with space in between the two layers. 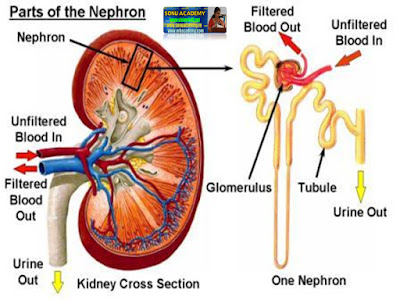 Inside the cup of the Bowman’s capsule, there is a network of large number of capillaries which is called as glomerulus. After entering the kidney, the  renal artery divides into a number of arterioles in the kidney. 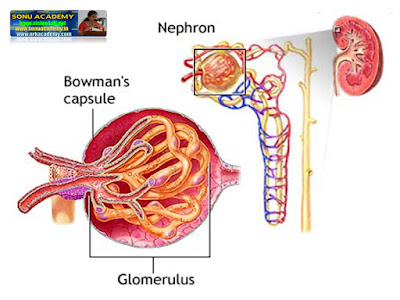 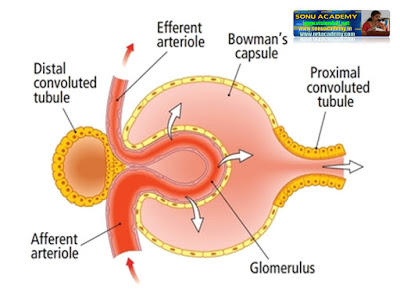 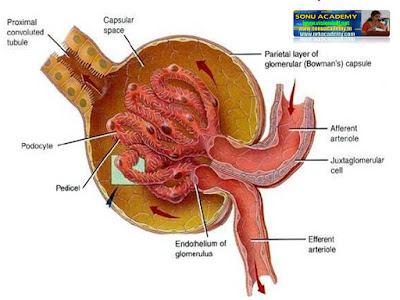 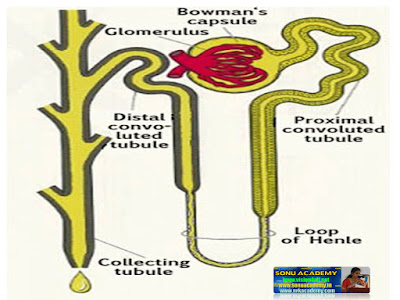 All the water soluble, small molecular weight substances such as salts, glucose, amino acids along with nitrogenous wastes are filtered from blood. Blood cells and proteins are not filtered through the pores present in the capillary walls. This filtration is called ultrafiltration. 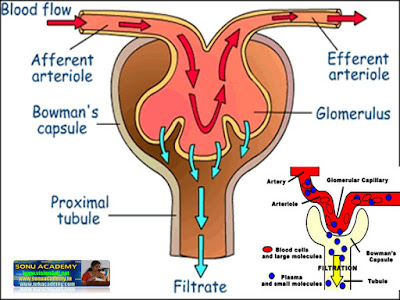 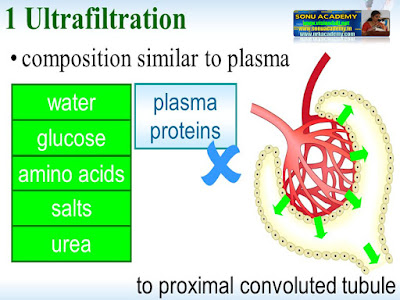 The reabsorption of the urine produced by Bowman’s capsule takes place in the tubular portion. When the filtrate reaches the proximal convoluted tubule, the epithelial cells of the tubule reabsorb several substances in a selective manner and transport them back to blood. 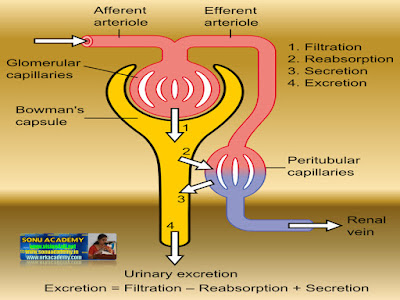 Reabsorption of water and salts also occurs in the loop of henle and in distal convoluted tubule. Water, salts and other substances reabsorbed by the tubule are transported into the blood. 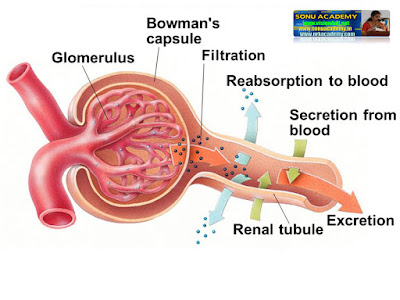 Unabsorbed substances along with water enter the collecting duct which discharges urine into pelvis and then into ureter. Urine is produced continuously and is concentrated continuously. 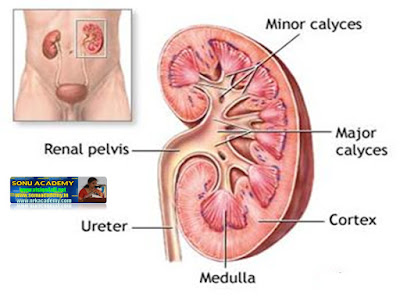 This reaches Smooth muscles (involuntary muscles) in the wall of ureter produce peristaltic movements which prople urine into the urinary bladder. 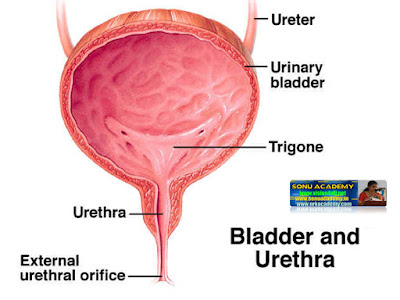 The urinary bladder is a muscular sac and opens to the outside through urethra.At the Junction of bladder and urethra is a sphincter. Urination is a reflex action. 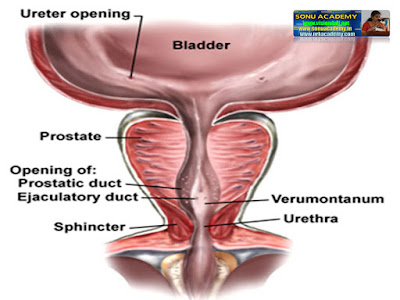 But in elders, it is voluntary. In children, urination is an involuntary action. Normally, when about 200 to 300 ml of urine reaches the bladder, the muscles in its wall contract and relax expelling urine. 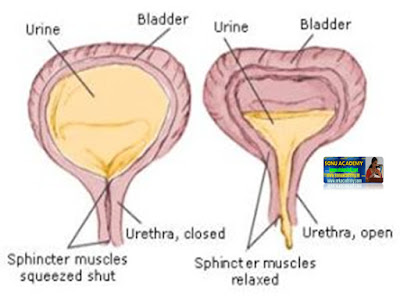 DIALYSIS AND ITS PRINCIPLES 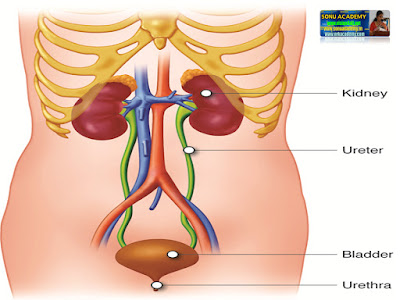 In the previous chapter you have learnt that a mumber of wastes are produced in the body which are carried by the blood to the kidneys. In the kidneys, these wastes are separated from the blood and excreted as urine. In certain disease conditions, the nephrons in the kidney die. 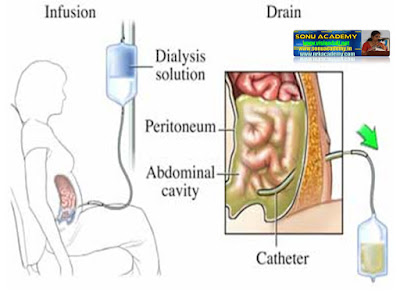 n such persons, blood is not filtered and urine is not produced. As a result, waste products accumulate in the blood and they become toxic to the body. Such people may loose consciousness or may even die. 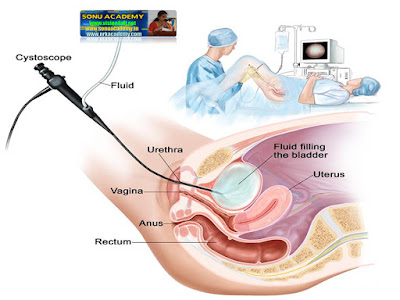 Doctors treat such patients by artificially removing the waste material from the blood. The separation of wastes from blood by artificial method is called dialysis. Dialysis machine is used for this purpose. 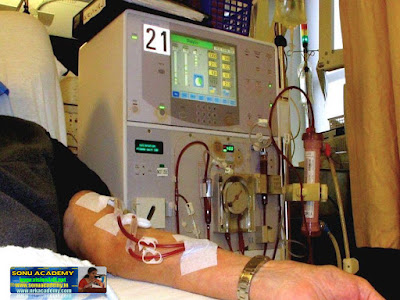 Blood from the artery is sent into the dialysis machine where it is filtered and the filtered blood is sent into the body through a vein. Persons whose kidneys do not function, have to undergo dialysis once in three or four days throughout their life or get a new kidney transplanted.


NANDITHA
Posted by AKUNURI NANDITHA at 10:49:00 PM
Email ThisBlogThis!Share to TwitterShare to FacebookShare to Pinterest