It is 3 o’clock in the afternoon. There are no clouds in the sky. The sun is burning hot. 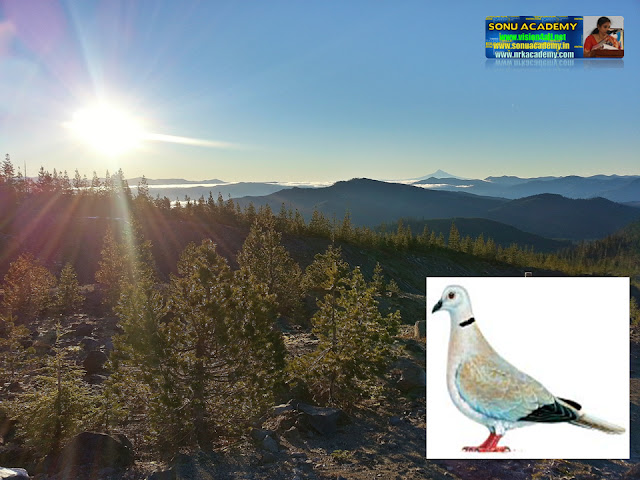 The sparrows, doves and sunbirds have started working in pairs as they prepare to make their nests. 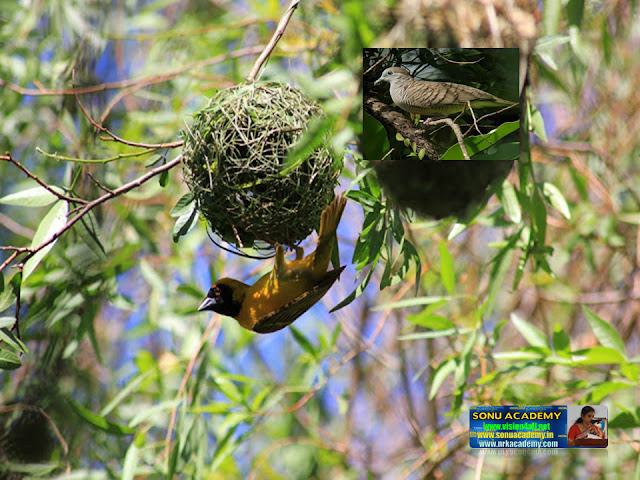 Some of the birds have already made their nests. In some of the nests, the eggs have hatched. The parent birds are busy feeding the chicks with different kinds of insects and other things. In our courtyard also, there is a baby dove. There is another egg in the nest but it has not hatched yet. 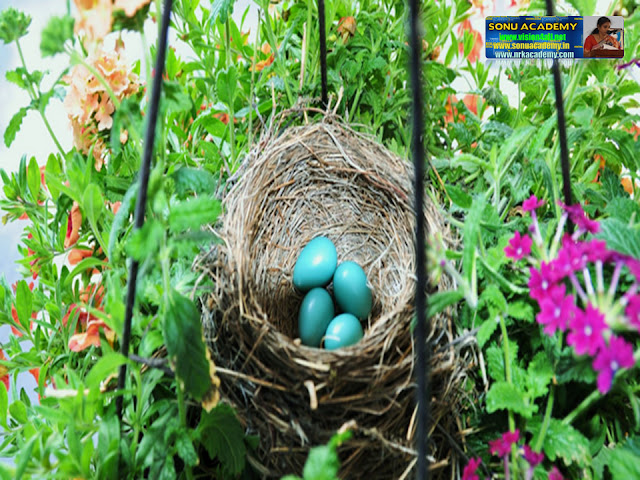 On the way to Gopalbhai’s house, there are many stones along the roadside. In the space between these stones, an Indian Robin has laid its eggs. 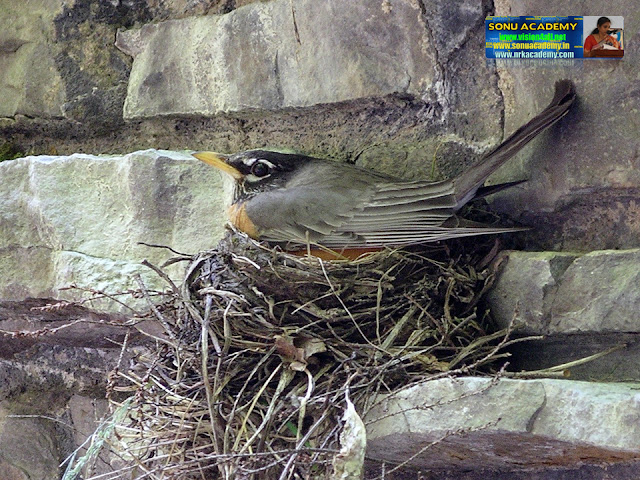 Bachubhai showed it to me. I looked through the binoculars. I saw that the nest was made of grass. On top there were soft twigs, roots, wool, hair and cottonwool. This is how the robin makes its nest. 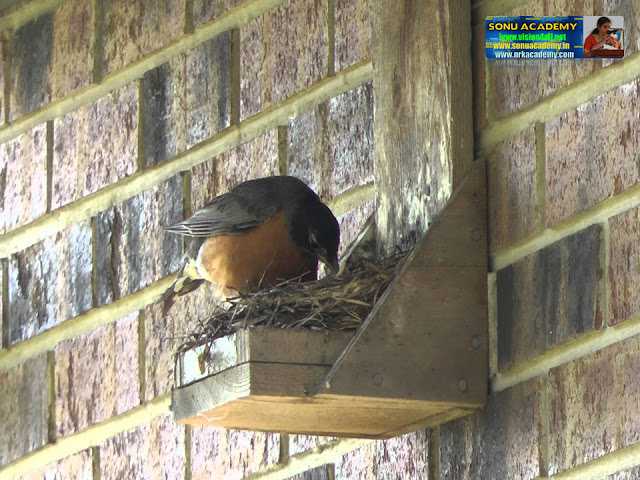 What a soft and cozy home for its chicks! The robin is not like the crow. A crow’s nest is made of all kinds of things – even pieces of wire and wood. 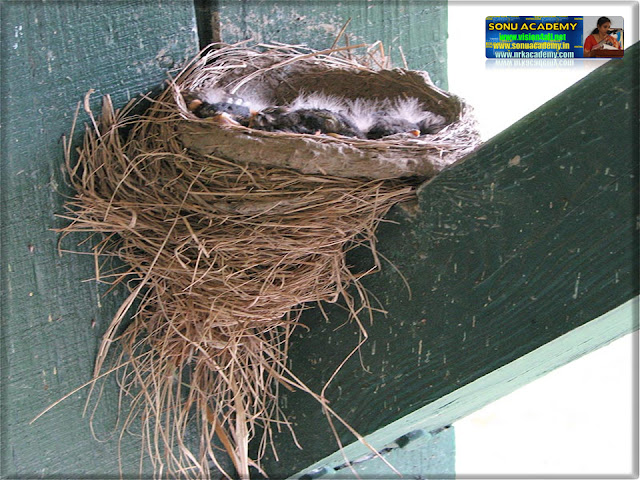 I saw a baby bird in the robin’s nest. t was sitting with its beak wide open.The mouth was red from inside. In a little while the robin flew to the nest and put something in the chick’s open beak – may be a few small insects. By then it was evening. The robin settled down with its chick. 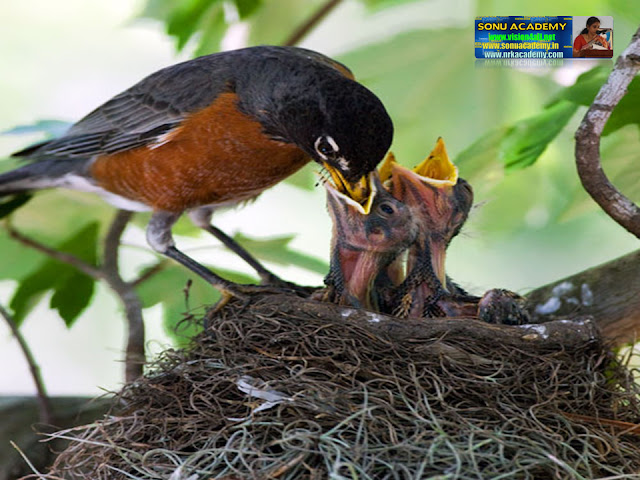 You know that the Koel sings sweetly. Do you know that this bird does not make its own nest? It lays its eggs in a crow’s nest. The crow hatches them along with its own eggs. 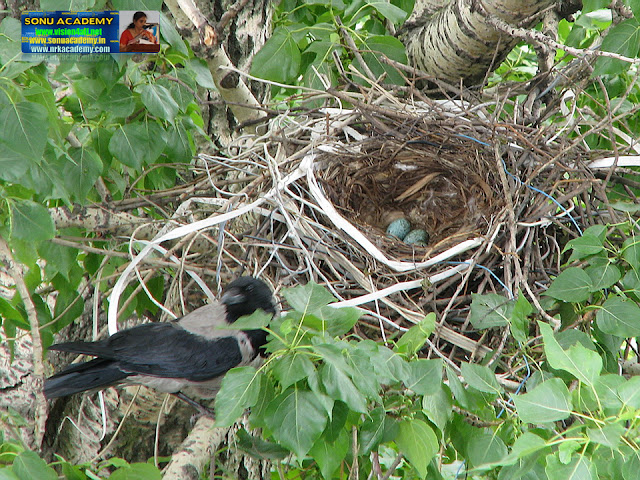 There is a small tree nearby. It has a nest hanging from its branch. Birds are so wonderfully different. 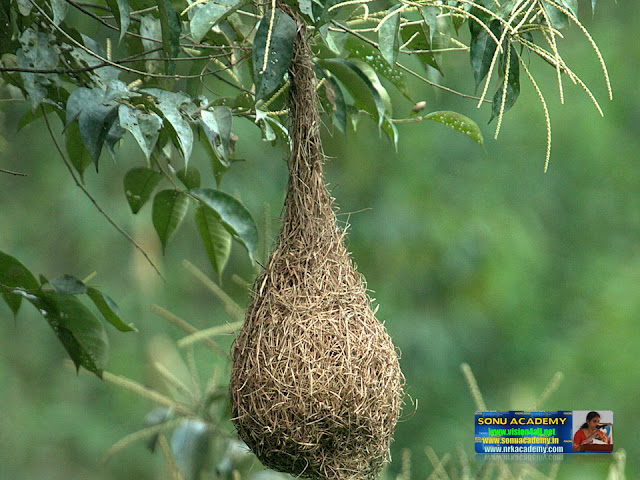 The crow builds its nest high up on a tree. 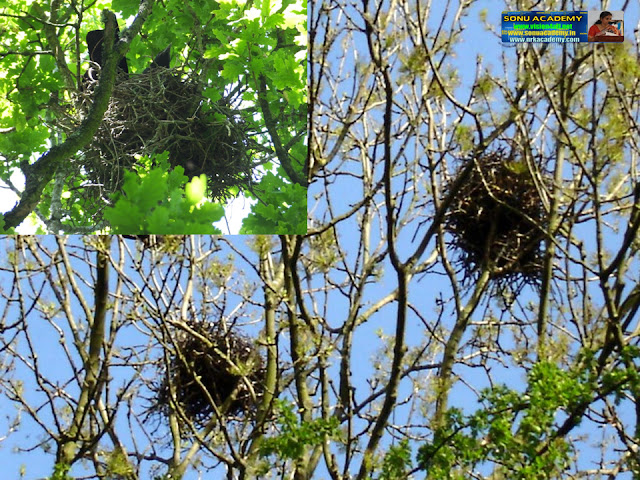 The dove makes its nest among the thorns of a cactus plant or a mehendi hedge. 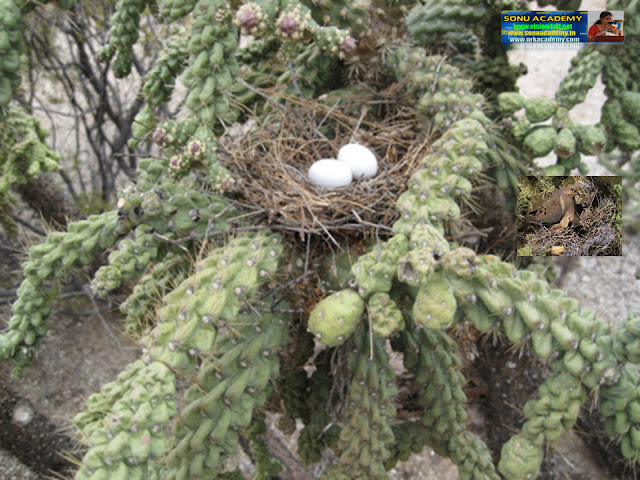 The sparrow can be found in and around our own house. It makes its nest anywhere – on top of a cupboard, behind a mirror, on a ledge. 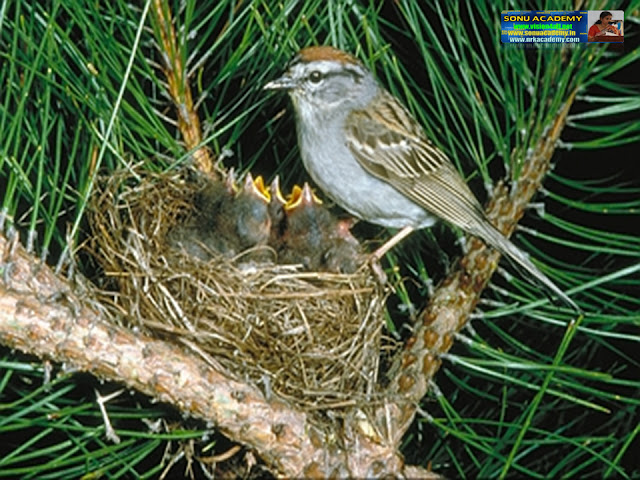 Pigeons also make their nest like this. Often they make nests in old or deserted buildings. 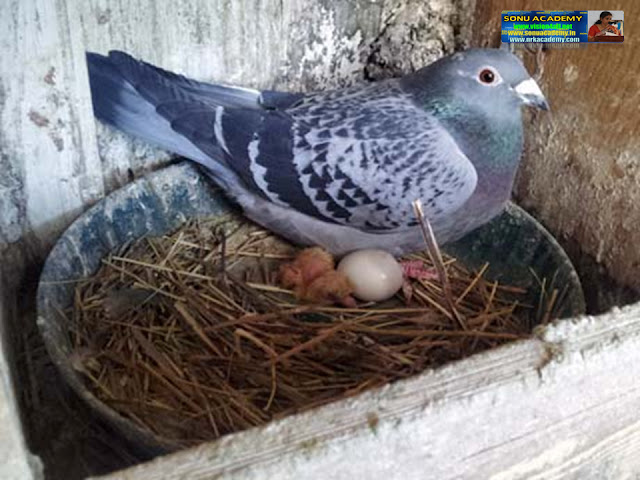 The barbet or coppersmith bird can be heard in the summer with its ‘tuk, tuk, tuk’ call. It makes its nest in a hole, in a tree trunk.  And the tailor bird uses its sharp beak to stitch together two leaves on a bush. It lays its eggs in the fold of the leaf that it has made. This is its nest. The sunbird makes a nest that hangs from the branch of a small tree or a bush. 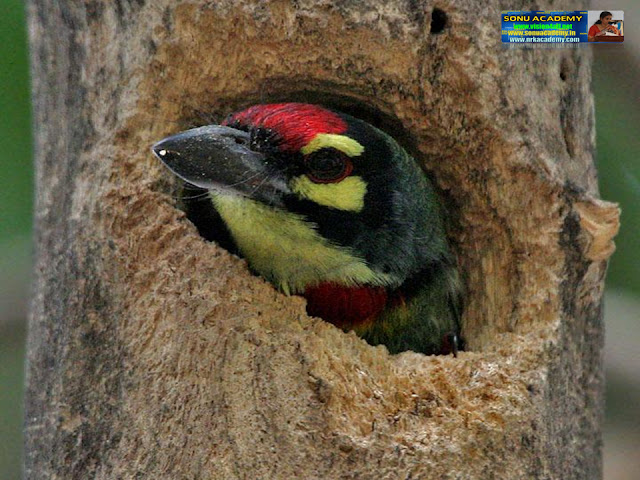 The same evening, we saw a sunbird’s nest. Can you guess what its nest is made of ? The nest has hair, grass, thin twigs, dry leaves, cotton wool, bits of tree bark, pieces of cloth rags and even spider’s cobwebs. 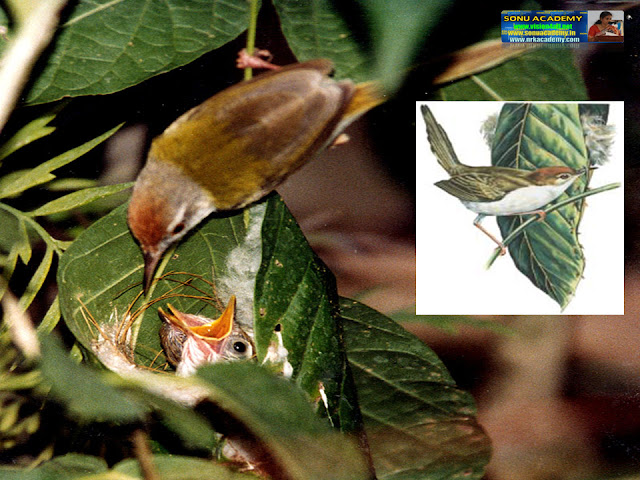 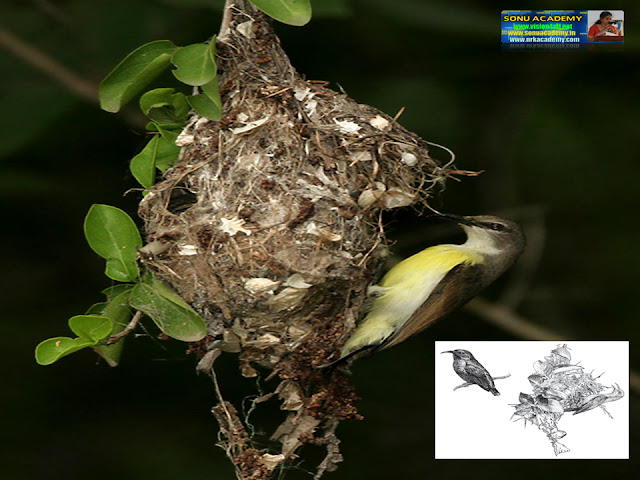 Do you know about the weaver bird? The male weaver bird make beautifully woven nests. The female looks at all the nests and chooses
the one that she likes the best and decides in which to lay her eggs. 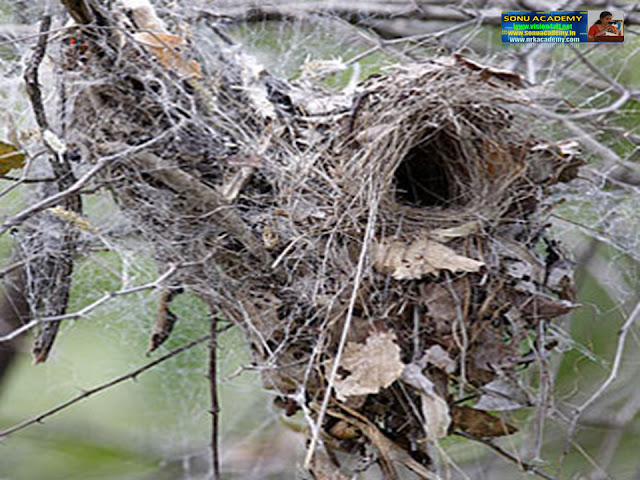 All the birds are so busy these days. Making a nest and laying the eggs is only the first step. 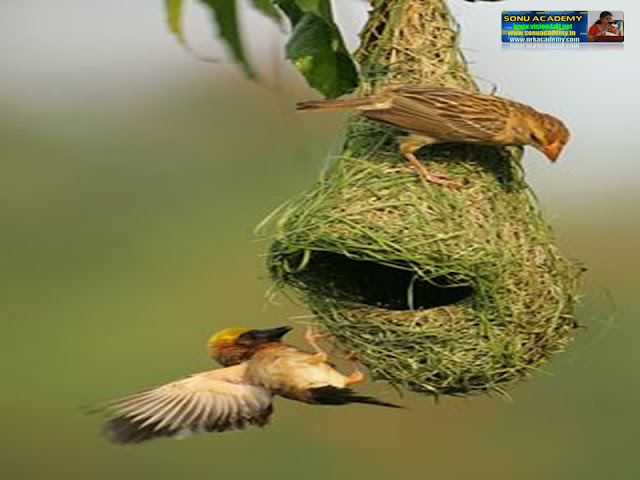 It is a difficult task to raise the young ones in the nest which had been made with so much effort. 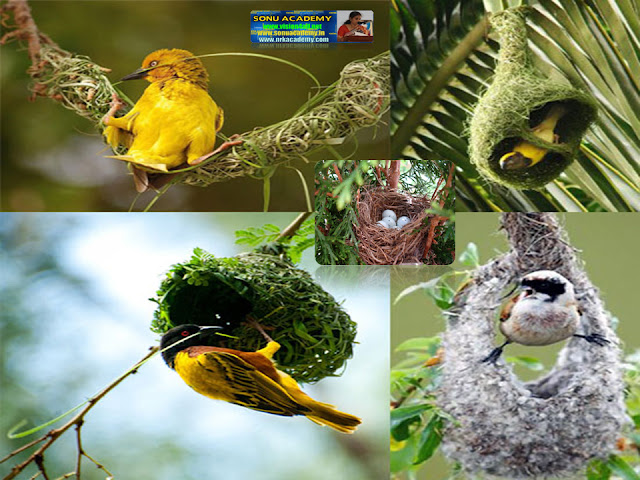 Birds have many enemies- humans and other animals too. Crows and squirrels, cats and rats- all of them wait for a chance to steal the eggs. Many times they even break the nest. 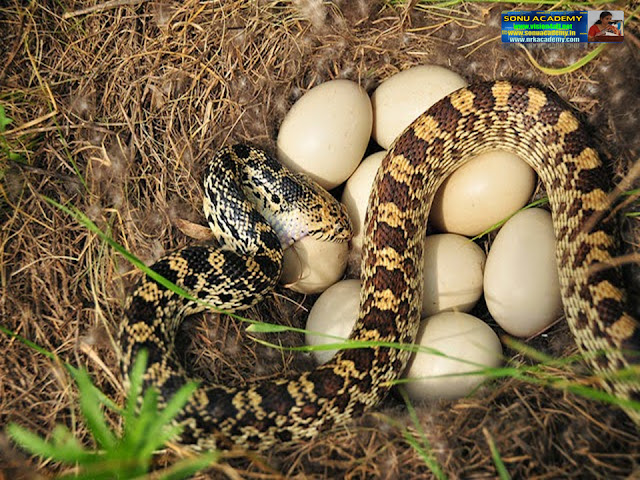 To keep oneself safe from danger, to find food, make a nest, hatch the eggs and raise the chicks safely-all these are tests for every bird. 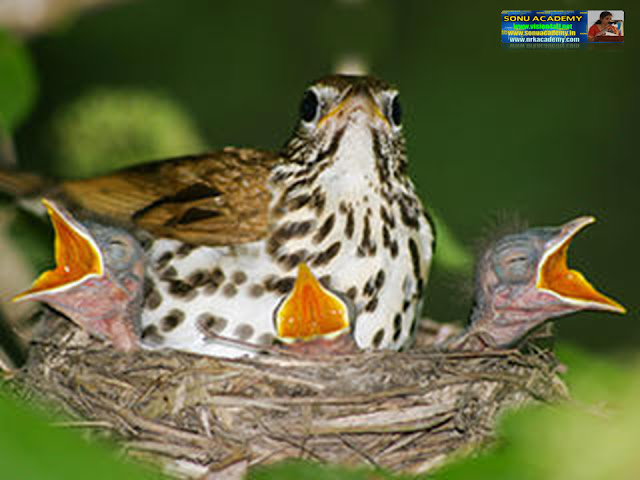 And see  how the birds still sing with joy and spread their wings and fly freely. 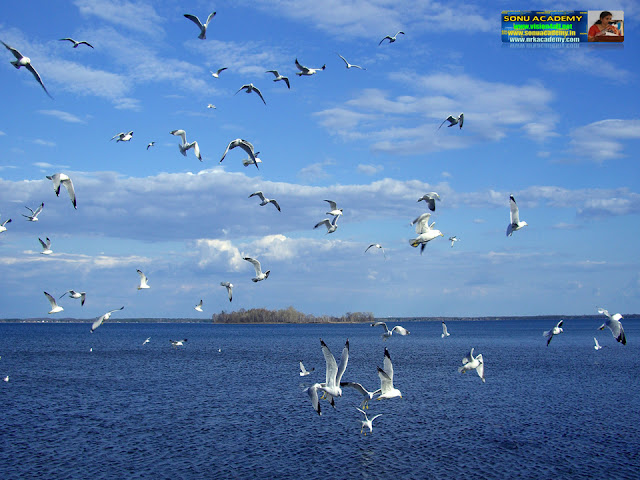 
NANDITHA
Posted by AKUNURI NANDITHA at 12:29:00 AM
Email ThisBlogThis!Share to TwitterShare to FacebookShare to Pinterest